In our previous tutorial (Syntax and Basics for R Programming) we had an insight into a simple hello world program that gives you a brief idea of how to use RStudio, basic syntax, and how comments are written in R. This tutorial takes you to one of the fundamental basics of R i.e. the variables and constant concept in R. If you have any prior knowledge to python, Go (Python, Go) programming languages it will be a great advantage, within a short time you will be masters in R. The others don’t get panic R is a simple language that anybody can learn like a toddler learning to walk. So let’s jump to our tutorial and walk together.

What are variables in R?

Once a variable is created during the time of execution of the R program it identifies the datatype (type of data stored inside variable may be an integer (3), float (3.9), string (“R”)) of variable and allocates with a corresponding memory location. 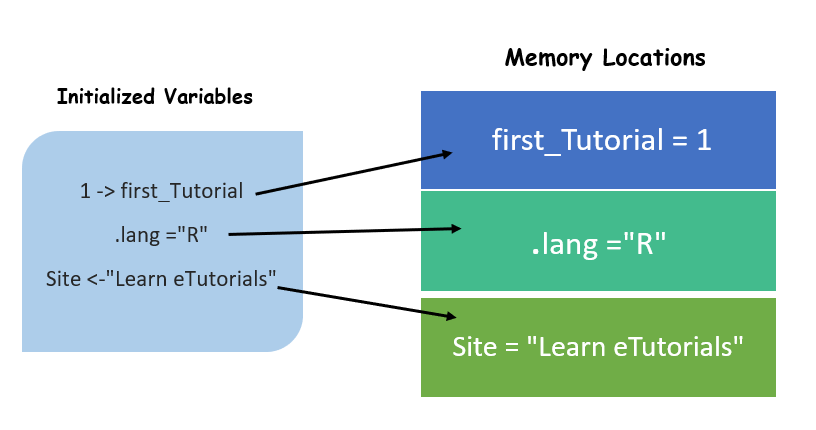 How to declare and initialize variables in R?

In the R programming language, three types of operators support in declaration and initialization of variables. The three operators are as follows

The syntax for assigning variables with values using the above operators.

Program to declare and initialize in R

In the above program, a variable site is created of string data type. The value “Welcome to Learn eTutorials” is assigned to site variable using “=” equal to or assignment operator. Similarly, another variable language is created which holds the value "R programming " .In these lines of codes leftward operator (“ <- ”) assigns value to variable language. In the last lines of codes, you can see the program begins with initializing value "Variables in R" followed by a rightward operator “->” which assigns value to the variable Tutorial.

How to write variable code in R Script?

Let us begin from the scratch with the classic hello world program. You are going to create a variable hello world of string datatype and print the resultant statement. In order to edit our code easily,  we will begin by familiarizing it with RStudio together with variables.

The following are the naming conventions followed in R programming language

Look at the snippet to visualize the code for better understanding. 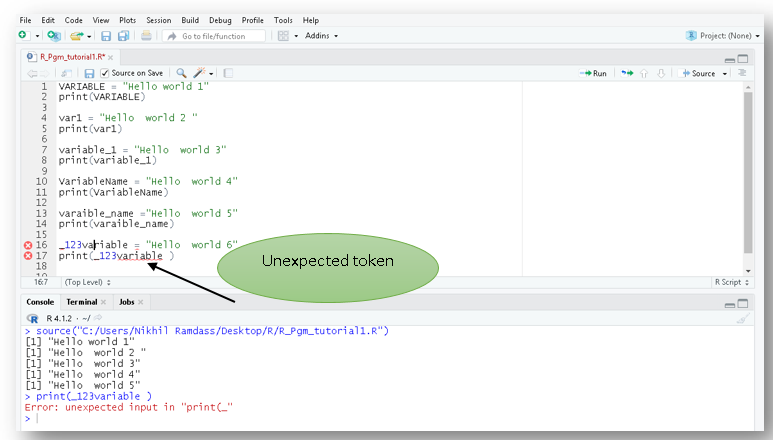 What is the Scope of variables in R?

Note: A scope is a region or segment where a variable is declared, initialized, and used. When this region or block terminates from its execution the variable gets destroyed automatically.

How to declare Global variables in R?

The example proves that the scope of the global variable is inside as well as outside of a function from where the globally declared variables are accessible and visible.

How to declare Local variables in R?

Local variables are only locally accessible and can be modified only within a function where it is defined.

What are the methods used by variables in R?

Like other programming languages, R programming also has a rich set of built-in functions also called methods. Methods are functions that are already defined to perform a specific task that the user requires. Everything in R is done through a method or function. For instance, print() is a function used to print the given text on the console. Similarly, R has hundreds and hundreds of methods to perform a designated task. Here in this section, we are focusing on some of the common methods associated with variables, their usage, and syntax. See below table :

How to identify the data type of a variable in R?

Program to identify data type of a variable in R

How to check available variables in R?

In the R programming language, the available variables are determined using a built-in function called ls().

These are the available or alive variables displayed by the below program during the execution of the program.

Program to check available variables in

How to remove/delete a variable in R?

In the R programming language, the unnecessary variables or variables of no functionality can be removed or deleted from a program by using a built-in function called rm().

These are the available or alive variables displayed by the below program during the execution of the program.

Program to remove/delete a variable in R

Let us add the below given built-in function rm() to delete a variable, where the parentheses enclose the name of a variable to be removed from the program.

When these lines of codes are added the variable named site gets removed from the program. You can see the corresponding output below after the execution of the program.

How to concatenate variables in R?

R programming language supports a built-in function known as a paste() to concatenate one or more variables in a program. Two variables A & B are declared with values "Learn R in" & "Learn eTutorials" respectively. In this program, values are assigned to variables A & B using a leftward operator.

program to concatenate variables in R

How to assign same value to multiple variables?

What are the types of variables in R? 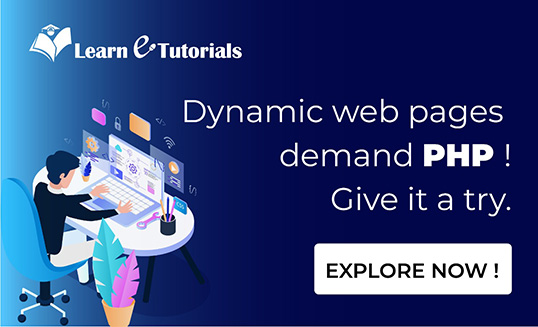